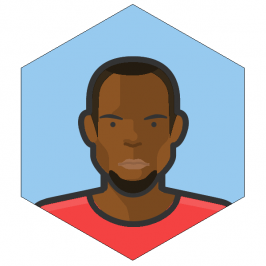 We talked with Terence Bradley in November, 2019.

Terence Bradleys Stats When We Talked with Him 💪

My name is Terence Bradley, I’m 21 years old, and I’m from Aurora Illinois, and Pine Bluff Arkansas in the United States of America. I’m currently 5’10 190 lbs. at 10% bodyfat.

What got me into fitness, in general, was football. I’ve played the sport since the age of 10 and over time my passion shifted from the field to the weight room. Despite being only 5’9 175lbs, I was always the strongest kid in my graduating class.

I’ve been weight training since I was 13 due to playing football, but I started bodybuilding specific training about three years ago after I graduated high school. Pertaining to fitness as a whole, you can say I started at the age of 10 since that’s when I started to get heavily involved in sports.

Back in high school, I didn’t know a thing about nutrition. I would only eat two meals a day, breakfast, and whatever my mom or grandmother cooked that night. Interestingly enough, I still made gains, but with the knowledge that I have now, I could only imagine how much stronger I could’ve been. Not to say that I’m any kind of nutritionist at this point, but I’m a lot more informed now than I was then.

When I graduated, I initially thought about continuing football through college, but I then realized that my passion for the field had diminished long ago and I decided to focus my efforts primarily on bodybuilding.

I drew major inspiration from pillars in the fitness community like Kai Greene, Seth Feroce, Kali Muscle, Dexter Jackson, CT Fletcher, and Mike Rashid. I gained a ton of knowledge from these guys from nutrition, routine, and overall mindset.

I try to train four to five days a week. M-Back/Biceps T-Legs W- Chest/Triceps Th- Back/Biceps Fri- Whatever I feel needs more work. My workouts tend to last 45 minutes to an hour depending on what muscle group I work that day, legs usually taking the longest to work.

As I stated previously, I get all my routines from the Internet, and just add my own flavor to them. I rarely go heavy, and always try to keep every set above or at 15 reps. I find that rep range works best for tearing down the muscle and establishing a mind-muscle connection for me.

I also do boxing training for cardio two to three times a week. At the end of the day, we’re all different people who have different bodies. Progress is dependent upon experimenting and figuring out what works for you.

In the words of Kai Greene, “Bodybuilding is an art, your body is the canvas, weights are your brush and nutrition is your paint”.

After graduation, I finally realized that building a physique wasn’t just about going to the gym and lifting heavy. With the knowledge I gained from the internet as far as routine and diet, I started eating right and my physique and PR’s improved tremendously.

The gym isn’t just a place where you go and pick up weights, it’s therapeutic for many, including myself, and if I wasn’t able to work out due to some circumstance I couldn’t imagine how I’d feel. I’m not saying that I never miss a workout, but when I lack motivation I try to think back on that.

I just moved back to Aurora a few months ago, and I plan on resuming my studies at the local college here. I’d also be interested in competing in the classic physique division, but I know that I have a long way to go mentally and physically before considering that.

Right now, I’m just having fun with the process and taking things one day at a time.

As far as injuries go, I’ve never really sustained anything major other than straining my shoulder during a benching session. I didn’t warm up like I should have and pulled a muscle. I just made sure not to load that muscle group for about a month.

So when it comes to combating injuries I’d say warm-ups shouldn’t be taken lightly, and in the event of an injury, avoid that muscle group until the pain is gone.

As far as rest, I try to get a good 7 hours of sleep each night. An ample amount of sleep is one of the most important things for recovery. You tear down the muscle fibers in the gym, and during sleep is when muscle repair and growth happen.

My primary objective as far as diet goes is to reach my protein goal each day.
Tweet This
Share This

I have a conventional diet. Due to having a fast metabolism, I’ve never had to keep my diet strict. Every week I’ll cook chicken breast/tilapia, rice, and broccoli and I’d mix it in with whatever else I’d eat that day.

I try to meet a protein goal depending on my body weight at the time. I still eat fast food occasionally, along with other things, but I just mix those meals in throughout the day. I know as I get older I won’t be able to be as lax with my diet, but as far as right now, I eat basically whatever I want.

My primary objective as far as diet goes is to reach my protein goal each day. Currently, as far as supplements I only take Whey Protein, but back in the day, I took creatine as well.

The Rocky series as a whole has probably inspired me more than anything. Not wanting to just be another guy from the block, and never giving up no matter what the odds are are key things from the series that have stuck with me.

My advice to people just starting their fitness journey, and even as a reminder to those who’ve been on it for quite some time, is to try not to take too much in at once.

As I’ve learned from Kai Greene, it all starts with discipline on a very basic level. The sciences won’t mean a thing without basic discipline.

When I first learned about nutrition, I wasn’t as focused on how many grams of protein and carbs as much as I was on following through when it came to getting up, cooking and eating them in a timely fashion.

By no means am I saying to not focus on the specifics, but building character on a very basic level and working your way up is what worked best for me. And this goes for the gym as well.

As far as clients, in the future, it’s a possibility, but I want to make sure that when and if I do take on clients, that I give them the best guidance I possibly can.

I’m still experimenting and working on becoming the best version of myself mentally and physically, and until I’m at that point I won’t officially take anyone under my wing.

Regardless, if anyone has any questions I’ll use the best of my abilities to guide them on the right path. You can find me on Instagram @TjBr4dley, Facebook: @terence.j.bradley, and snapchat @txbradley.

Related Interviews
The Burpee Workout That Will Leave Your Abs Burning
I’m an Online Fitness Trainer. This is How I Go for Success on a Global Scale
Perfect Shoulder Workouts With Dumbbells For Only 12 Weeks!
Increased Use of Bodybuilding Supplements Over Time
How I Moved from Dancing to Yoga and Became a Full-Time Yoga Teacher