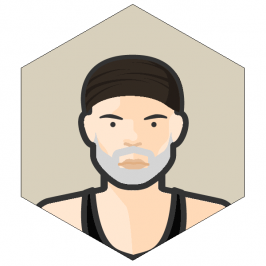 We talked with John Machin MegaVegan in October, 2019.

John Machin MegaVegans Stats When We Talked with Him 💪

I was born in London in 1956. I’ve been vegan all my life. And, no; this wasn’t due to forward-thinking parents in the 1950s. My parents were anything but.

Instinctively, from the earliest age, I found food derived from animals abhorrent. I couldn’t – still can’t – remain in the vicinity of many animal foods without feeling nauseous.

The thought of putting meat, cheese, butter, fish, &c in my mouth was disgusting; I knew I’d be physically sick.

Aged 5, I was warned by our family GP that I would die before ten if I didn’t start eating meat and dairy. I didn’t, and I didn’t. My parents were resigned to my dietary choice; by this time, it was a fait accompli: nothing they could do would make me eat what they thought I ought to be eating. In those days, this was known as being a fussy eater.

My parents were heavy smokers. This resulted in an asthmatic, inactive childhood. At the age of eleven, a subsequent GP prescribed an inhaler. Suddenly, I could catch up on the activity I’d missed as a child. And so began a lifetime of training.

In case this is getting boring, here are the bullet points:

I exercise daily in a gym for two hours; sometimes three. The workouts conform to a protocol called Super-Calisthenics (q.v. my MegaVegan Facebook page and You Tube channel) devised over my 50 years of training, and discovering the faults and flaws in more conventional methods of exercise.

All the exercises are closed kinetic chain movements, which involve the entire body. No machines and no free weights are used; with a little creativity, bodyweight is more than enough resistance for intensive training.

So, rather than constantly adding more and more weight (a recipe for eventual injury), I add difficulty by upgrading instability and changing angles and planes of movement.

My favourite exercise is a version of the Pull-Up unique to Super-Calisthenics: the Suspended Gull-Wing Pull-Up, each repetition performed from a deadhang position.

Every workout includes between nine and eighteen sets of these, each set lasting at least 90 seconds.

I don’t count reps: one person’s rep can last half a second; another’s eight seconds or more.

In this way, ten reps taking 90 seconds is a vastly superior test of strength to 20 reps taking 40 seconds. Comparing the number of reps, therefore, is meaningless.

An amusing method I have of calculating the intensity of a Super-Calisthenics workout is estimating the time spent in contact with the ground: the less, the better.

I’ve been vegan 63 years. I grew up with the hilarious concept that physical strength derives from eating meat. (Hilarious, because all the largest, strongest land animals are herbivorous.)

I’m lucky enough to be able to demonstrate that the opposite is true. Long-term health, strength and fitness derive from a diet of plants.

Using and abusing animals for food is unnecessary and, therefore, immoral. To prove this is more motivation than anyone needs.

I’m still in the gym for a couple of hours a day; and, even after 50 years of training, I’m still learning.

I don’t make plans. I try not to have personal hopes and expectations; that seems to risk constant worry and disappointment.

As for the road ahead in a more general sense, well, given the way the world is finally waking up to the evils of animal farming – the Future is Vegan!

I’ve been giving it 24 hours for a decade. Individuals differ in their ability to adapt to faster recovery: typically, a seasoned trainer can accelerate recovery to 24 hours over a period of one or two months.

Super-Calisthenics is based on closed kinetic chain exercises. It’s scarily intensive and dramatically effective, but it’s kind to the joints. So the only injuries I get are to my pride when I find an exercise I can’t do.

When I tell you that we have five rescue cats and a resident stray cat, you’ll understand, in our house, there is no such thing as rest!

I’m on about 2700 calories a day. I avoid sugar, fried food and alcohol. I eat about 20 portions of fruit/veg a day.

I include a couple of mini-fasts each day to naturally upregulate those beneficial hormones we’re told us oldies are short of. This means approximately five hours without food. Much longer, and you risk gluconeogenesis.

I use 1) vegan proteins and 2) vegan meal replacements, because 1) protein synthesis in old people is inefficient and 2) I dislike spending time and using valuable resources preparing and cooking food.

I would never use anabolic steroids; how sad that anyone feels the need to do that; but I’m okay with some supplements – not least because the micronutrients in our food have dwindled drastically since the 1940s.

As per Question Three: I’m vegan. Like it or not, we still have a lot to prove; and, because proving it will finally enhance and save the lives of the Earth’s tortured, terrorized and terminated animals, there is no more powerful motivation.

The beneficial side-effects of this approach will improve you more than any direct action.

I answer the exercise and nutrition questions I’m asked on social media. But, otherwise, I’m fully involved in developing new challenges and concepts in Super-Calisthenics.

Here are links to my Facebook page and You Tube channel.

Related Interviews
I’m an NPC Bodybuilder. This is How I Plan to Become IFBB Pro
How I Stopped Eating Junk Food and Became a Fit Personal Trainer
Boost your testosterone – Supplementation: Gold or Trash?
Crispy Baked Veggie Pockets
I’m a Strength and Conditioning Coach. This is How I Eat, Train and Play